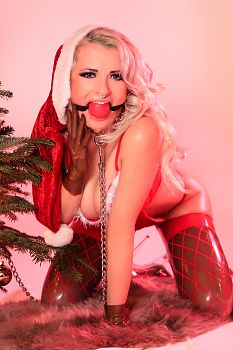 The aim is to prevent the sub being able to express any own desires or opinions. But the ball gag belongs thereby to one of the most common gag and is one of my personal favorites. But why do I love to wear a ball gag and what does it feels like?

Photos with Girls and Ball Gag 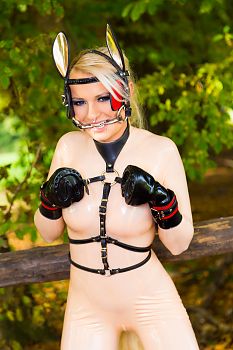 In many scenes it is normal that the girl take the obedient and submissive role, although today's society tries to propagate the opposite. A ball-gag takes on an important role and the ball gag is to obey.

I think many women are self-sufficient out of necessity. But if a woman has a strong partner she can unconditionally follow which is for me one optimal relationship. Therefore, I see myself in pictures preferred on knees with a beautiful eye-catching ball gag to wait for commands.

Images with Ball in Mouth

The depiction of woman in various poses has been known since the invention of photography. Whether it is the act or a portrait but always an image has its own effect on viewer. A photo can appealing or repulsive act and the same goes for images of women with a nice big ball gag in her mouth.

Many photos are simple perfect in styling and show woman in pictures with a ball gag in submissive postures with a rope or handcuffs. The kneeling pose with a submissive looking to camera is certainly the most exciting image for dominant viewer.

The diversity in the bondage scene but also many other conversations are possible, showing a very submissive mood. Open hands or a lying posture with a bare ass for punishment are also charming and the ball gag in these pictures is always an important role. 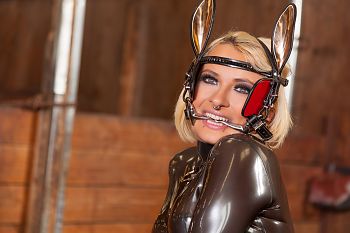 A ball gag is a mouth gag in the shape of a ball which is pushed between a person's teeth and fixed by a band around the head. The open mouth canâ€™t be closed and the teeth are widely spread like a stag-evil and only the lips are on the ball of the ballgag.

Speaking with such a ball in the mouth is impossible whereby this freedom of the person is taken.

There are different types to be ball gagged: 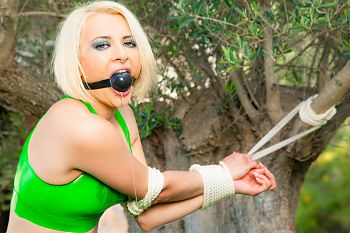 The optimal size of a ball gag is very important because too small balls arenâ€™t satisfying for the sub and an excessively large ball can be very painful when wearing from the beginning without training.

How to train to wear a large ball gag? 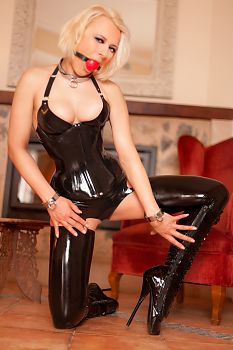 Like any passion it is sometime boring if you always do and wear the same and at some point you would like to increase things for more joy and intensity. The same also applies to the sub who loves the pleasure to wear a ball gag. The ball size is important and parallel to the sense of humiliation wearing a large ball is also associated with a certain pride.

If you donâ€™t know much about ball gags or you have never worn before a ball-gag between your teeth then you should start with a smaller ball with about 4 cm in diameter. Just to feel something in the mouth and thereby be prevented to close the mouth, is extremely aphrodisiac but for many people itâ€™s firstly unfamiliar and new.

For myself, I started with a slightly larger ball and first broadcast 10 minutes to wear the ballgag until I took it out. I chew a little and after maybe 15 minutes I repeated to wear the ball. I made this in the first dayâ€™s maybe 5 times a day and could change after 3 days to a ball with 5 cm diameter. But donâ€™t fix the size as a direction for yourself. You may have a smaller or larger mouth and take another ball from the beginning. At least you should feel that your mouth is open and stretched.

The jaw gets stretched quickly and with a progressive training it should not hurt. That might be the time to get a larger ball gag. It is a particular challenge to handle the salivation with larger balls which you canâ€™t exercise. 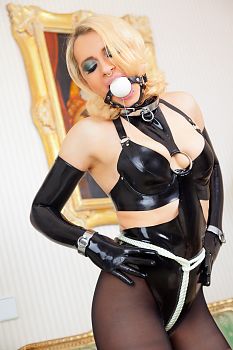 "Help, I drool when I wear a ball gag!â€œ a good friend told me once from a last session. She looked at me and I noticed she felt uncomfortable as she would tell me something bad or unusual. But I was stroking her with a grinning and curiously asked how she liked it. She smiles back and I knew she loved it.

Of course, she liked the feeling of being delivered to the partner. Every carrier of ball gags closes the lips around the ball. This is instinctive to avoid drooling around. However, the saliva flow is stimulated because of the spread mouth so that over time more and more saliva gets in the mouth.

The ballgag prevented at a certain size to swallow so that eventually the lips must necessarily be released from the ball. Thus, the saliva flows out of the mouth which some people find particularly demeaning.

Humiliation with Saliva from Ball-Gag 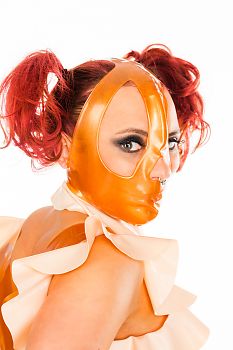 The feeling of humiliation is often exacerbated by the dominating partner who punishes the sub for this "unavoidable misconduct". For example, in connection with bound arms on the back the sub is often obliged to wipe the saliva off from the floor which increases the feeling of helplessness and be on someoneâ€™s mercy.

From the perspective of a sub this scenario is a beautiful moment of devotion and to be cared for feeling. But you need to see for you if you feel in this situation of uncontrolled flew of saliva a feeling of humiliation or dedication. At least it is important that you find way of passion. For this test you donâ€™t need someone dominating.

Take a ball gag for yourself in your mouth and let the feeling flow. You will notice after some minutes that you canâ€™t hold the saliva. You begin drooling and you can now see how you like it if you go to a window and give your look public. I stand for one hour in hotel room naked in front of a window in the ground-floor and finally I was very proud for this experience. 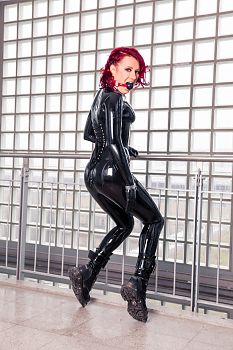 Since the option was taken to talk the partners have to see the body language and hear on the way of moans which works of course still perfectly with ball gag. However, one must bear in mind that speaking in dangerous games has a need like using a safe-word.

The shape of the passionate devotion can of course also be reinforced with a ball gag or any other gag. The uncontrolled flew of saliva offers both additional ecstasy but here the confidence to the dominant partner is important. 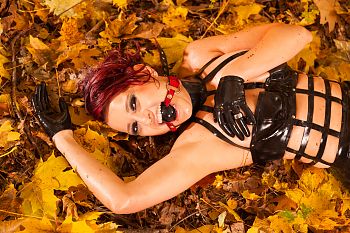 Since the ball-gag prevents the slave the chance to speak the safe word the partner need to see and hear the limits.

Many of my friends asked me of women seriously like ball gags or if itâ€™s just a fetish of men. To clear this up right here: Every woman like every man is different. So yes there are many women like me who like a big ball gag, like to wear them between the teeth while drooling a lot while other women donâ€™t like the feeling or the little kind of humiliation.

To answer this seriously complicated question if women like ball gags or humiliation you always need to know more about the person itself. Therefore, I can only answer from my personal feeling but maybe this already helps you.

A ball gag is for me at very first a kinky sex toy and very welcome if Iâ€™m very kinky and naughty. In this situation I canâ€™t hold by myself and Iâ€™m available for everything. Getting in touch with a dominating man Iâ€™m a willing toy and go far behind every borders of a usual sexual life.

Personally, I love to get forced to do things which are not usual and while I refuse to be usual I love to get a ball gag. Sometimes, I like a ball gag so much that I moan a lot even if a dominating man orders silence. So a ball gag can be a punishment which might be as welcome as a good clap but also if you go in public the ball gag is a fantastic way of humiliation while getting the arms bound on back and with many dolling.